Historians Lied: Hitler Did Not Die In Germany


Historians Lied: Hitler Did Not Die In Germany

Newly declassified FBI documents prove that the government knew Hitler was alive and well, and living in the Andes Mountains long after World War II.

On April 30 1945, Adolf Hitler committed suicide in his underground bunker. His body was later discovered and identified by the Soviets before being rushed back to Russia. Is it really possible that the Soviets have been lying all this time, and that history has purposely been rewritten?

No one thought so until the release of the FBI documents. It seems that it is possible that the most hated man in history escaped war torn Germany and lived a bucolic and peaceful life in the beautiful foothills of the Andes Mountains.

Recently released FBI documents are beginning to show that not only was Hitler and Eva Braun’s suicide faked, the infamous pair might have had help from the director of the OSS himself, Allen Dulles.

In one FBI document from Los Angles, it is revealed that the agency was well aware of a mysterious submarine making its way up the Argentinian coast dropping off high level Nazi officials. What is even more astonishing is the fact that the FBI knew he was in fact living in the foothills of the Andes.

Who is the Mysterious Informant?

In a Los Angeles letter to the Bureau in August of 1945, an unidentified informant agreed to exchange information for political asylum. What he told agents was stunning.

The informant not only knew Hitler was in Argentina, he was one of the confirmed four men who had met the German submarine. Apparently, two submarines had landed on the Argentinian coast, and Hitler with Eva Braun was on board the second.

The Argentinian government not only welcomed the former German dictator, but also aided in his hiding. The informant went on to not only give detailed directions to the villages that Hitler and his party had passed through, but also credible physical details concerning Hitler.

While for obvious reasons the informant is never named in the FBI papers, he was credible enough to be believed by some agents.

Even with a detailed physical description and directions the FBI still did not follow up on these new leads. Even with evidence placing the German sub U-530 on the Argentinian coast shortly before finally surrounding, and plenty of eye witness accounts of German official being dropped off, no one investigated.

Even More Evidence is Found:

Along with the FBI documents detailing an eye witness account of Hitler’s whereabouts in Argentina, more evidence is coming to light to help prove that Adolf Hitler and Eva Braun did not die in that bunker.

In 1945, the Naval Attaché in Buenos Aires informed Washington there was a high probability that Hitler and Eva Braun had just arrived in Argentina. This coincides with the sightings of the submarine U-530. Added proof comes in the form of newspaper articles detailing the construction of a Bavarian styled mansion in the foothills of the Andes Mountains.

Further proof comes in the form of architect Alejandro Bustillo who wrote about his design and construction of Hitler’s new home which was financed by earlier wealthy German immigrants.

Perhaps the most damming evidence that Hitler did survive the fall of Germany lies in Russia. With the Soviet occupation of Germany, Hitler’s supposed remains were quickly hidden and sent off to Russia, never to be seen again. That is until 2009, when an archeologist from Connecticut State, Nicholas Bellatoni was allowed to perform DNA testing on one of the skull fragments recovered.

What he discovered set off a reaction through the intelligence and scholarly communities. Not only did the DNA not match any recorded samples thought to be Hitler’s, they did not match Eva Braun’s familiar DNA either. So the question is, what did the Soviets discover in the bunker, and where is Hitler?

It was not only General Eisenhower who was concerned over Hitler’s compete disappearance, Stalin also expressed his concerns. In 1945, the Stars and Stripes newspaper quoted then General Eisenhower as believing that the real possibility existed of Hitler living safely and comfortably in Argentina.

With all of the new found evidence coming to light, it is possible and even likely that not only did Hitler escape from Germany; he had the help of the international intelligence community. Released FBI documents prove that they were not only aware of Hitler’s presence in Argentina; they were also helping to cover it up.

It would not be the first time the OSS helped a high ranking Nazi official to escape punishment and capture. Look at the story of Adolf Eichmann who was located in Argentina in the 1960’s.

Did Hitler escape to Argentina? The answer is yes.


From Xpose the Real @ http://xposethereal.com/historians-lied-hitler-did-not-die-in-germany.html

Mainstream accepted history tells us that on April 30, 1945, deep inside a Berlin bunker, the infamous Nazi leader Adolph Hitler took his own life and that of his wife Eva Braun. That piece of history is now being serious challenged, but not without its share of controversy.

Recently unearthed evidence comprised of eyewitness accounts and other supporting FBI documents, tell a different story – that Hitler did indeed escape the bunker in the final days of the Fall of Berlin, flying to Denmark, then to Spain where General Franco supplied him with an aircraft to the Canary Islands, and finally to the Argentine coast by way of a German submarine. After settling in Argentina, Adolph Hitler eventually died of respiratory disease on February 13, 1962, at the age of 73. It would be an incredible story, if it wasn’t so compelling.

Controversy and disputes over how the evidence has been presented threaten to mire the debate, but one thing is very clear – it’s opened a can of worms for mainstream historians who had stood by the orthodoxy of a 70 year old ‘official’ narrative. Last week, the mainstream media coverage by London’s Express Newspaper added fuel to the debate citing more claims that the Fürer had escaped to Argentina.

The Express crowed on April 18th, “Adolph Hitler escaped by submarine to Argentina, where he lived in a heavily guarded ranch at the end of the Second World War suffering from asthma and ulcers, according to sensational claims contained in newly released FBI files”. 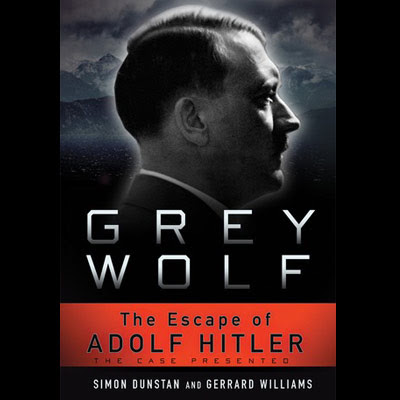 According veteran investigative journalist and co-author of Grey Wolf: The Escape of Adolph Hitler, Gerrard Williams (photo, left), the information contained in those FBI files and other sources are neither new, nor are they necessarily ‘sensational’, but due to some shoddy mainstream journalism, many facts are being misinterpreted by mainstream journalist who have suddenly happened upon the story.

Filmmaker and author of Grey Wolf, Williams, explains, “The files have been available for 10 years. We investigated them extremely thoroughly in Grey Wolf and reference in detail the most interesting ones.”

“The Express only needs to look in its own files for the period post-war and they will find many references – as did we, to Hitler’s escape, reported by their own staff and by Reuters and the AP.”

“This FBI Story is very lazy ‘journalism’. The story appeared, and not for the first time,  on Red Flag News and was simply lifted, over a month later, by Owen Bennett at the Express. If they want to treat the story with the seriousness it deserves I would recommend they read Grey Wolf and listen to the report from the BBC’s own Thomas Cadett, embedded with the Soviets when they took the Bunker in Berlin. It still amazes me that anyone is still taken in by Trevor-Roper, a medieval Historian put in by British intelligence to solve one of History’s greatest mysteries. Why not Scotland Yard or the FBI?  The man famously went on to authenticate The Hitler Diaries, which were a complete fraud”, added Williams.

Most certainly, one of driving forces behind the renewed debate and the establishment buckling on this historical sacred cow has been the surprise international success of the book Grey Wolf, co-authored by Gerrard Williams and noted war historian Simon Dunstan. The recent discovery that Hitler’s alleged skull in Moscow is actually that of a female – as well as a number of newly uncovered documents, has provided additional support for their case. Their book is the culmination of 14 trips to Argentina, and Berlin and to the Kew Archives, and the collation of other research and local sources. Since its release in 2012, it has been translated into 16 languages in over 30 countries, including English, Russian and Arabic, and has already has received a number of positive endorsements and reviews.

This year the story may go into into additional overdrive. A sister documentary film to the book is being released this year, available on DVD and Download in the UK from May 18th, and with distribution deals ready for the US, Canada and Scandinavia. It has already been available in Australia and New Zealand since the beginning of the year and has already been broadcast there by the History Channel, and also in Serbia.

21st Century Wire was one of the first outlets to give British and world audiences an early peek into the story when it featured its interview with Williams in a 1 hour special ‘Fourth Reich in the Sun’, which aired on SKY’s PSTV in 2012. Watch his interview with 21WIRE host Patrick Henningsen:

As this heavily guarded piece of history begins to unravel, more people will be compelled to ask that fundamental question: if one of the most important historical conclusions of the 20th century has been covered-up, then what else have we been lied to about?

Certainly, that’s a question we would all like answered one day.


For more information about the mad times and fraudulent heroic demise of Adolph Hitler see http://nexusilluminati.blogspot.com/search/label/hitler
- See ‘Older Posts’ at the end of each section

Hope you like this not for profit site -
It takes hours of work every day to maintain, write, edit, research, illustrate and publish this website from a tiny cabin in a remote forest
Like what we do? Please give enough for a meal or drink if you can -
Donate any amount and receive at least one New Illuminati eBook!
Please click below -

For further enlightening information enter a word or phrase into the random synchronistic search box @ http://nexusilluminati.blogspot.com

The Prince of Centraxis - http://centraxis.blogspot.com (Be Aware! This link leads to implicate & xplicit concepts & images!)

DISGRUNTLED SITE ADMINS PLEASE NOTE –
We provide a live link to your original material on your site (and links via social networking services) - which raises your ranking on search engines and helps spread your info further! This site is published under Creative Commons Fair Use Copyright (unless an individual article or other item is declared otherwise by the copyright holder) – reproduction for non-profit use is permitted & encouraged, if you give attribution to the work & author - and please include a (preferably active) link to the original (along with this or a similar notice).

Feel free to make non-commercial hard (printed) or software copies or mirror sites - you never know how long something will stay glued to the web – but remember attribution! If you like what you see, please send a donation (no amount is too small or too large) or leave a comment – and thanks for reading this far…

Live long and prosper! Together we can create the best of all possible worlds…

From the New Illuminati – http://nexusilluminati.blogspot.com

Add your perspective to the conscious collective